First published on Wednesday, April 10, 2013
tl;dr: a better git branching workflow under the bold sentence below.

a git repo is a data structure and the git commands are algorithms, and that's it.


But anyways, I wanted to offer a solution to the problem posed in "Only the Gods".

It is quite simple: when you create a branch, always start with creating an empty commit in that branch, like so:

git checkout -b BRANCH_NAME
git commit --allow-empty -m "created branch BRANCH_NAME in which we will ...."


That way, after merging, you will always have a reference to the branch names in which the commits were made. Seems like a good way to use the git system for versioning source code :)


Discuss this on HN.


Some more explanation if you need it:


In the git data structure branches are pointers to commits. Much like a variable in most programming languages, its name is irrelevant to the rest of the system. (I can hear you thinking: "But I work with variable names all the time, to me they are important!". Yes you're right, but like I said: forget about it and focus on what the algorithm does, at least for now). When examining a commit history using tig, we can trace the two commits involved in a merge operation: 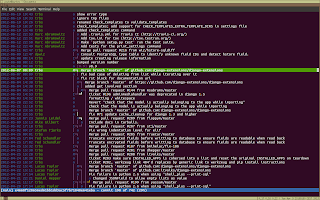 You can see that the text of the merge commit already holds the branch names, but this is not guaranteed when you're merging remote branches or want to have a custom commit message.

Last year I got my Cowboy  3 e-bike and I love it. Every day I start riding the bike it feels great, it makes cycling even better than it already is. My only gripe is unlocking the bike with the app, which takes about 15 seconds. This post is about how I built a BLE powered 3 button key that unlocks my bike, and the physical key unlocks the battery. Here it is in action: Is it faster? Maybe. But cool? Definitely. But why? tldr: It doesn't make sense, but I learned a lot and it was fun. I used the official Cowboy app with a cheap Android phone (Moto G7 Play) and also an my wife's iPhone SE (both first and second gen). On the iPhones the Bluetooth works a lot better, once the app opens it's almost instant. But: unlocking takes about 15 seconds: taking your phone out of your pocket while you're fiddling with the lock (7s), finding the app (3s), opening it (3s), unlocking (2s). If you do this 2 times a day for 365 days it will take 3 hours. So, I decided to spend a week and
Read more